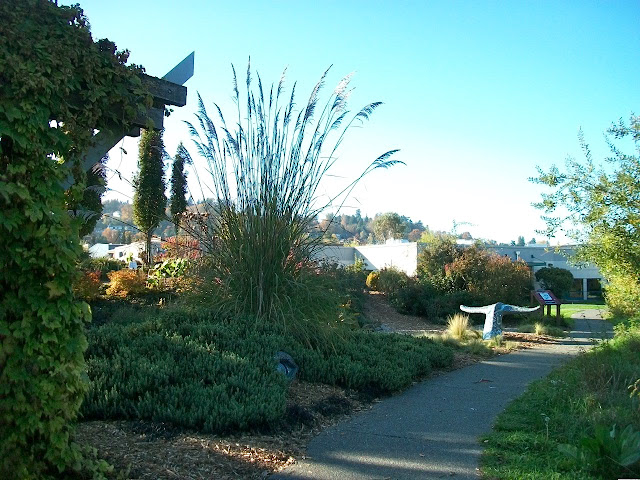 Magnuson Children's Garden is FREE to the public and open 365 days a year for families to have self-guided scavenger hunts and other adventures! This vibrant, interactive, children’s garden was created by community volunteers, using the ideas that have been dreamed up by local children and their parents, and is filled with plants and other features that delight all the senses.  It has been a community treasure since 2001!

It's nesting time for our resident Anna's Hummingbirds! 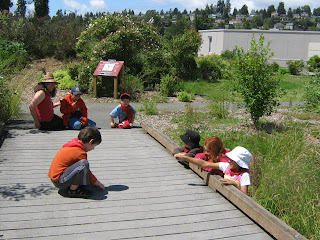 Hi there Children's Garden fans,
Have you ever noticed the gigantic rose that's growing just behind our Children's Garden interpretive sign with the whimsical garden map? That amazing plant is an ancient Rosa 'Cecile Brunner' climbing rose, that each spring and summer is covered in masses of fragrant pink flowers. But that's not even the best part of its life! This rose has the honor of being the favorite perch for our resident Anna's Hummingbirds, and is "home base" for their annual courtship displays which are fantastic to watch. Their most elaborate displays usually take place in January and February, but last fall they were also happening in October! Perhaps you've even seen the incredible aerial dives and swoops yourself, in the Children's Garden or elsewhere.... these little birds are not very afraid of humans and will swoop right over your head if you are standing close to the object of their affection! 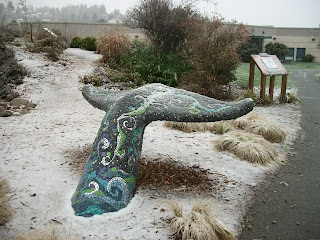 Because this large climbing rose is such an important site for these year-round residents, it is likely to also contain a nest, which is not visible from the outside of the plant. We haven't ever seen a nest, but that doesn't mean it is not there... because Hummingbird nests are very tiny- made from lichen, moss, and stolen spiderweb strands... so they can be completely camouflaged in an ancient old rose like this. It could be inches from your face and you would miss it, since it would just look like a part of the plant.

This wonderful element of "our" Cecile's life came about unintentionally on our part, but has been a very happy accident that instantly became a huge asset to the Children's Garden. When this large rose was donated to the Children's Garden in 2003, we originally left the old woody canes and deadwood on it because we had no structure for the rose to climb on and wanted to give its few new canes something to drape over. But now it is such a reliable place to watch Hummingbirds, it has become one of the best "hot spots" in the garden for children and families who attend Nature Explorers Camps, special events, or just regularly stroll though!

You may have seen Rosa 'Cecile Brunner' in other gardens, trained onto an arbor or wall of a house, and carefully pruned each year to keep only the largest, young canes. If you take a good look at our Cecile, you can quickly see that we do not take care of it in this way. Our Cecile is purposefully kept "under-maintained", because its beauty as a home for the Hummingbirds has transcended its rather free-form appearance. Yet despite the minimal pruning we do each year, it has remained very healthy and blooms its head off every spring and summer! So we'll continue with that maintenance plan for the foreseeable future, and rejoice in the unique life that it nutures.

If you're in the garden one of these days soon, you might see some of the courtship displays going on- Anna's Hummingbirds typically start nesting in February, so now is the time for the males to impress a potential mate with spectacular aerial displays- just don't stand too close or you might get a little tap on the head as they swoop by!

Speaking of being in the garden, our programs and activities are starting up soon, with much to choose from for children and families to attend, or for volunteer participation. Visit www.magnnusonnatureprograms.blogspot.com for all the details! 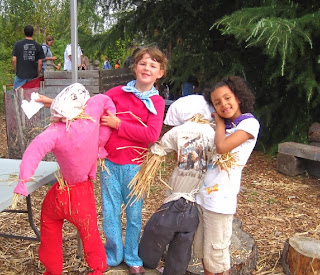 The Children's Garden has a lot of extra special reasons to say "hip hip hooray" this year, and welcomes you to add your cheers at the


2nd Annual Fall Harvest Celebration!
A huge extravaganza, co-hosted by Magnuson Community Center and Magnuson Community Garden
Saturday October 1st
11:30am-2:30pm
FREE activities for children and families will take place in the Children's Garden, Amphitheater, Demonstration Orchard, and nearby grassy areas:
Volunteers are needed to help make this event even more special. Email us at magnusonchildrensgarden@gmail.com if you would like to help. 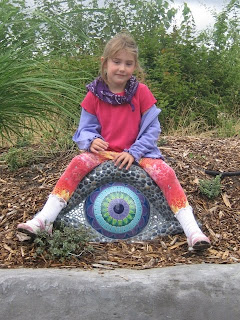 Here's a few of the things we have to cheer about this year:

The Grey Whale Garden got a brand new eye to replace the one that was stolen in 2010. Look closely when you walk by, and you might see the whale wink at you with delight!

Your votes helped Magnuson Community Garden win a $4000.00 grant from DeLoach Organic Vineyards and Organic Gardening Magazine, which it will use to build disabled-access garden beds in the P-Patch and install educational signage throughout the site.

Volunteers continued to support the garden by using their time, energy, and talent to keep it beautiful! We are especially grateful to King Co. Master Gardeners, Seattle Works, and children in the Magnuson Community Center Nature Explorers Program.

The Children's Garden is 10 years old! It's hard to believe that the first design charettes with children and parents from local schools took place in the fall of 2001. The wonderful and whimsical ideas generated at these events (and others in 2002) are what makes the Children's Garden so special and unique to this day. The vision of children is what brought the Rolling Hill, Lookout, Grey Whale Garden, Salmon Survival Path, and Starfish Border to life, and continues to add fantastic new features to the garden each year! 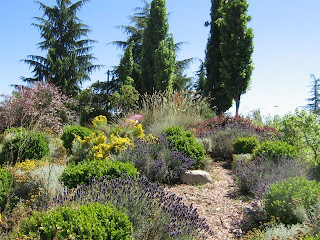 For more information on this event or any others, email us at magnusonchildrensgarden@gmail.com
Posted by The Magnuson Children's Garden Committee at 8:06 AM No comments:

Thanks for helping us win the grant contest!!!

Your vote helped Magnuson Community Garden rally in the vote count at the very end of the nationwide contest to squeak in at #5, and therefore win a $4000.00 grant from DeLoach Organic Vineyards and Organic Gardening Magazine!

Thanks to you, the Community Garden will be able to build disabled-access garden beds in the P-Patch and install educational signage throughout the site. This will create more opportunities for gardeners of all ages and abilities to grow their own food, and will make it easier for each and every visitor to the Community Garden to learn about the 6 distinctly different areas within it as they stroll though its trails and pathways!

Thanks so much for your support!

Please help us celebrate during our last few events of the summer:

5th annual "Blues for Food Fest", a day-long benefit concert for the P-Patch Trust, who support local food banks, shelters, and hot meals programs. Free gardening fun for the whole family during the afternoon hours of the concert.


The Himawari Project
A wonderful international gardening event began this summer, called the Himawari Project. Himawari is the Japanese word for Sunflower, and besides being one of nature's most beautiful flowers, himawari have the amazing ability to absorb radioactive cesium from contaminated soil, thereby neutralizing its effects. Himawari Project volunteers have distributed hundreds of packages of sunflower seeds at events in Seattle earlier this summer, to be grown in gardens all over the Pacific Northwest. This fall, they will send the seeds collected from these sunflowers to the farmers of Northern Japan, to be planted in their fields next year to help heal the nuclear contaminated lands. Besides absorbing the cesium, the mature sunflower plants can be used to safely make biodeisel fuels. The Himawari Project sends a powerful message of caring, hope, and beauty to our friends in Japan who have suffered so much this year.


For more info on any Magnuson Children's Garden events listed above, email us at magnusonchildrensgarden@gmail.com

Posted by The Magnuson Children's Garden Committee at 10:04 AM No comments:

Please Vote for Us!

Please Vote For Us!

Organic Gardening Magazine and DeLoach Organic Winery have chosen the Magnuson Community Garden to participate in a nationwide grant contest, and you can help us win a $3,000-4,000 grant by casting your vote for us at

2011 marks the tenth anniversary of the 4-acre Magnuson Community Garden, which contains the fabulous and fun Children's Garden, a bird-filled Native Plant Border, Demonstration Orchard with over 40 fruit trees, a Tranquil Garden for horticulture therapy, and a Native Plant Nursery that grows plants for restoration projects all over the city.

The Community Garden was largely built and is maintained by volunteers from the community. It also contains one of the largest P-Patches in King County, which donates more than 4,000 pounds of fresh produce to local food banks each year, and an outdoor amphitheater that provides a picturesque setting for free summer concerts, Shakespeare-in-the-park performances, and other special events.

Web site viewers can vote online at www.deloachcommunitygardens.com once a day for their favorite garden between now and July 31. The Magnuson Community Garden icon is a closeup from the above photo, of two smiling girls holding their newly made scarecrows at our 2010 Fall Harvest Celebration!

The five gardens receiving the most votes will each receive a $3,000-4,000 grant. If the Community Garden receives one of the grants, it will fund two very worthy projects that will benefit all visitors, especially seniors and disabled gardeners:

For more information about the entire Magnuson Community Garden, please go to www.seattle.gov/magnusongarden

And thanks for your vote!!!

Posted by The Magnuson Children's Garden Committee at 2:35 PM No comments:

You're invited to come to the garden to enjoy fun and educational activities! 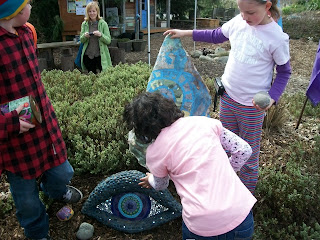 April 9th re-dedication of the Gary Whale Garden as the grand finale of the Celebrate Urban Nature event: the big moment when the new eye was unveiled! For more info and photos, go to www.jrnatureexplorers.blogspot.com 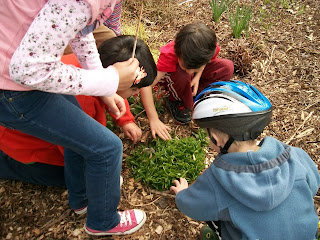 Finding the flowers of the "Mouse Plant" on April 9th.

"Summer Fridays in the Garden" during Free Family Concerts
These events are co-hosted by Magnuson Community Center. Dance, dig, and explore!

4th annual "Blues for Food Fest", a day-long benefit concert for the P-Patch Trust, who support local food banks, shelters, and hot meals programs. Free gardening fun for the whole family during the afternoon hours of the concert.
United Way "Day of Caring" Bring your children to join volunteers in fall fun!

Volunteers are needed at each of these events, and you can choose from a variety of ways to help: help guide the volunteers from Seattle Works and other groups, help children explore the garden and worm bin or make nature art projects during events, help set up refreshments, or other support activities. Please RSVP to magnusonchildrensgarden@gmail.com if you would like to help- and thanks in advance!

Posted by The Magnuson Children's Garden Committee at 2:22 PM No comments:

Come Celebrate Spring in the Garden! 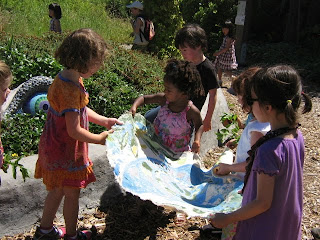 Re-dedication of the Gray Whale Garden!

On Saturday, April 9th, Magnuson Community Center is kicking off its 2011 Nature Programs with a huge party- the 2nd annual "Celebrate Urban Nature" event! As a grand finale to the festivities, we will have a big parade down the block from the Community Center to the Children's Garden for a re-dedication of the Gray Whale Garden and its brand new eye!

We know you will thoroughly enjoy spending your day at the park, because the "Celebrate Urban Nature" event is chock-full of natural fun! 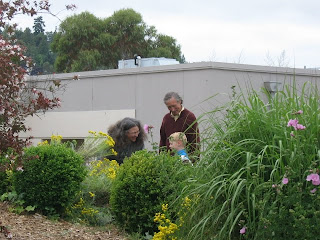 Posted by The Magnuson Children's Garden Committee at 12:49 PM No comments: